Angus North and Mearns Liberal Democrats launched a local  campaign to Save Our Police this week-end across the constituency.

Reacting to plans by all three other major parties to centralise the police to a single force, Sanjay Samani, Scottish Liberal Democrat candidate for Angus North and Mearns, commented:

“In my view the fight against crime in Scotland is now under threat from plans by the SNP and the other parties to centralise our police. Under their plans local police forces would be disbanded and every police officer would be allocated according to national directions not local policing need.”

“I am particularly concerned that by creating a national police force, the chief constable will come under the political control of a government minister and will lose their links with local communities.

“In addition, the cost of centralisation, building a new HQ and new IT systems will costs a fortune and will cost police jobs. The SNP has refused to answer repeated questions about how much their plans will cost, fuelling fears that police officers will lose their jobs to pay for the changes. Some chief constables have estimated it could cost the jobs of 4,000 police officers.”

Angus and Mearns Liberal Democrats want to keep policing local, help the local police to work with the local community and to keep the number of officers high.

“In the course of the next few weeks we will be distributing thousands of leaflets about our campaign across the constituency,” Sanjay continued, “and I would urge residents to sign and return our petition by Freepost, so their voice can be heard.”

“You can also support the campaign on Facebook at http://www.facebook.com/SaveOurPolice.”

“This is a slippery slope to one police force. For 150 years people in this democracy have worried about the government gaining political operational control over policing. The First Minister refuses to see that a National Police Board, appointed without debate in this Parliament – and with no basis in law – moves us down that dangerous road.”

“We need a police service that is responsive to local needs not subject to central diktat and centrally imposed targets.” 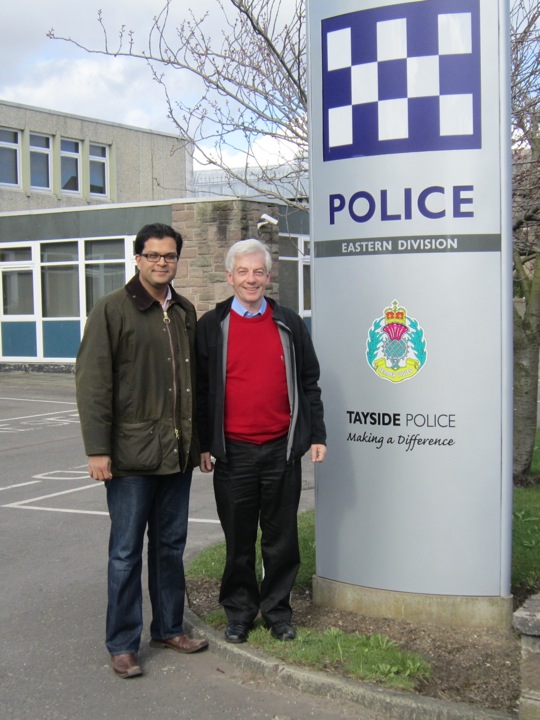 0 thoughts on “Save Our Police Campaign Launch”