I am very grateful to the Liberal Democrat members in Angus and the Mearns for their support and their decision to select me as their candidate. I am looking forward to continuing the campaigns that we have been running in the area.

The SNP have said they will fight the next election on just the issue of independence. Most people are concerned about their jobs,  rising prices and the economy. This shows how out of touch the SNP really are. They have been completely unprepared for the economic crisis, created by the Labour government.

In just five months, the Liberal Democrats in coalition have put in place plans to take 900,000 low earners out of income tax, restore a fair pension and to provide £2bn extra in child tax credits for poorer families.  In stark contrast, in over four years, the SNP have failed to deliver on their hollow promises of more police, smaller class sizes and maintaining teacher numbers.  The Liberal Democrats can do more for Scotland and for Angus and the Mearns.

﻿Stonehaven Liberal Democrat Councillor, Peter Bellarby, said, “I am very pleased that Sanjay has been selected. Mike Rumbles has served Stonehaven and the Mearns well and I am sure that Sanjay will continue to listen and respond to the concerns people have in this area, just as Mike has done. In the revised constituencies, Mike Rumbles will be the candidate for Aberdeenshire West and I am sure that Mike and Sanjay will form an excellent partnership for this area.”

Liberal Democrat Cllr David May from Montrose, commented “I am delighted that Sanjay has ben selected.  He has an excellent record on campaigning on local issues.  He has called for the SNP government to reinstate funding to prevent coastal erosion and flooding, to provide relief to small businesses who received huge rises in their business rates and for a full time service at Forfar fire station. And he has been a strong supporter of Jill Campbell’s campaign for a flyover on the A90 at Laurencekirk Junction.”

David continued, “Angus North and Mearns is a new constituency for the Scottish Parliament.  In the Mearns, residents have elected four Lib Dem councillors, Sir Robert Smith MP and an outstanding Liberal Democrat MSP, Mike Rumbles who has stood up for their needs at Holyrood.  Unfortunately, SNP representatives have let down Angus residents.  Now, Angus and Mearns residents will get a straight choice between an SNP candidate and a Liberal Democrat who will continue to fight for local people.”

Below: Sanjay campaigning for a flyover on the A90 at Laurencekirk, along with ﻿Laurencekikrk Flyover campaigners Jlll Campbell and Julie Watson, with Tavish Scott MSP, leader of Scottish Lib Dems, Mike Rumbles MSP, Sir Robert Smith MP and Montrose Cllr David May 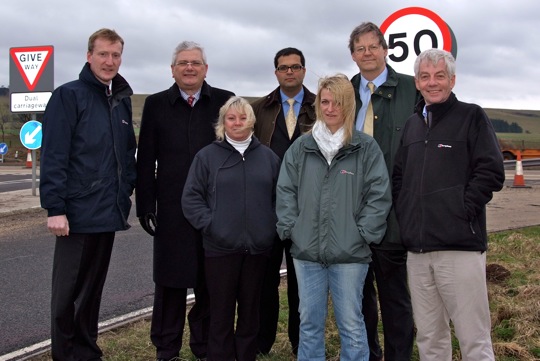 0 thoughts on “Angus North And Mearns”