The SNP’s proposed funding of the Flood Risk Management Act us based on a simplistic count of properties. Instead the Flood Forecasting Service should be used to target resources.

Worries have emerged as part of a recent consultation response to Scottish Government plans, which will shape the nation’s future flood management response, with Angus Lib Dem Cllr David May claiming rural areas such as Angus and Mearns look certain to lose out.

The SNP government’s Flood Risk Management (Scotland) Act 2009 has been described as a “big step forward … providing a unique opportunity to shape new ways of working and creating a modern, sustainable approach to flood management fit for the 21st century.”

A number of Angus communities have suffered flood misery in recent years and, at a time when major financial challenges face councils, Angus infrastructure services convener David May has attacked the way money is dished out for flood schemes.  Presently under this government, funding depends on the number of properties directly affected.

“The funding formula means that urban areas — by their very nature more densely populated — are going to be advantaged and areas such as Angus and Mearns will lose out.

“Having in the past year regularly visited areas affected by flooding, I call on the Scottish government to reconsider their policy.”

“Given financial pressures facing councils, so it is more important than ever to make sure we receive adequate funding and do not lose out just because of our location and population.”

Highlighting the specific across Angus, Mr May continued,

“In March this year Angus Council agreed some short term measures to improve the Barry Burn Flood Protection Scheme. However, although these short term measures have been met from the council’s roads budget it is unlikely the Council will be able to fund the potential longer term solutions under investigation for Carnoustie.”

“A similar situation exists in Arbroath, which experienced significant flooding beyond the usual risk areas. The removal of the dedicated government grant scheme has thrown plans for flood protection schemes into complete disarray.  Added to this, is the confusion created by the phased introduction of the new Flood Risk Management Act (2009) which changes local authorities’ responsibilities and powers.”

“We are doing what we can locally – today we will be discussing the latest report on the Brechin Flood Protection Scheme. Although this is a relatively modest scheme by national standards, it still comes with a price tag of £13m. Flooding needs to be considered at a national level, as the resources required to properly address it are clearly beyond the financial means of local government.”

“By funding the new flood prevention schemes for the new act based on population, the SNP Government is being too simplistic.  They have announced funding for a new Flood Forecasting Service.  The information from this service must be used to target central government funding for flood prevention.”

PHOTO: Sanjay Samani and Cllr David May visit the site of flooding in Brechin with Provost Ruth Leslie Melville: 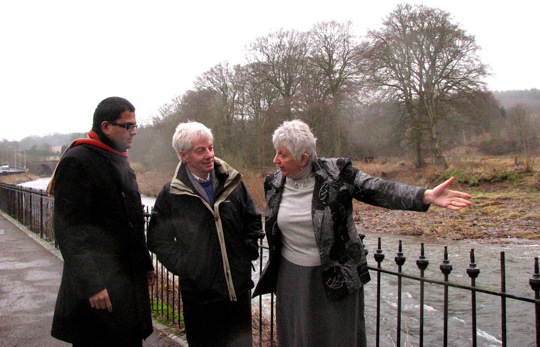