Liberal Democrat PPC, Sanjay Samani, has today backed calls for a flyover at the notorious Laurencekirk Junction of the A90. 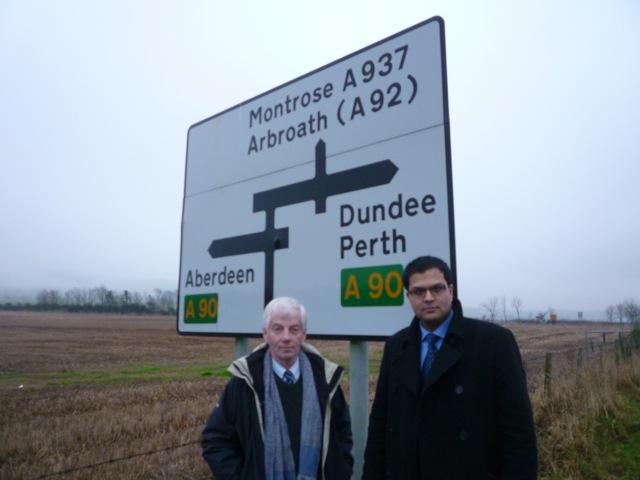 I am backing calls for a flyover at the notorious Laurencekirk Junction of the A90. The A937 junction is a well known black spot and is regularly used by North Angus commuters and shoppers making their way to Aberdeen.

There have been enough accidents at Laurencekirk and it is high time Minister for Transport, Stewart Stevenson took action. The SNP Government’s failure to act continues to demonstrate their desire to centralise decision making in Edinburgh. The SNP seems unwilling to listen to or draw on the knowledge and experience of local residents.

I have written to Minister for Transport, Stewart Stevenson asking him to take action. I am also calling on SNP representatives Mike Weir, MP and Andrew Welsh, MSP, to be independent of the SNP administration, and join our campaign to improve safety for Angus commuters and shoppers.

It was disappointing to hear that Transport Scotland see no need for a flyover and I would support the call for the Scottish Parliament to ignore the findings of the study. Saving lives should be of the highest priority when setting transport policy.

I am backing calls by local campaigner Jill Campbell, Liberal Democrats Sir Robert Smith, MP and Mike Rumbles, MSP, along with Montrose Councillors, Liberal Democrat David May and Independent Mark Salmond for the junction to be significantly upgraded.

You can find out more about by clicking here, a link to the campaign’s home page on Bebo, the social networking site.