Following the recent bad weather, Angus Liberal Democrats have renewed their calls for the Scottish Government to do more to help protect Montrose from coastal erosion.  There has been further erosion at Montrose Golf Course, which is the 5th oldest in the world and will celebrate its 450th year in just two years time.

Reacting to news of further erosion at the Golf Course and along the coast, Sanjay Samani, Lib Dem campaigner for Angus and Mearns said:

“I was shocked to hear from Montrose Cllr David May this morning that there has been further erosion at Montrose Golf Course.  I visited the course with Alison McInnes, Lib Dem MSP for the North East, just three weeks ago to inspect the damage.”

“The SNP have scrapped a special flood funding scheme introduced by the previous Lib Dem / Labour administration.  They have largely left Councils to fund such schemes from their own budgets.”

“With both coastal erosion and flooding, the SNP Government have focussed on funding warning systems.  While the new warning systems are worthwhile, they do not replace the need for investment to protect our coastline”

“The SNP have not allocated enough money to properly tackle coastal erosion and so risk losing an important part of Scotland’s sporting heritage.  The golf course is all that stands between Montrose and the risk of damage to the town.”

Montrose Cllr David May commented, “This morning, I inspected the impact of the recent bad weather on the coastline at Montrose Golf Course. There has been further erosion, especially at some of the more vulnerable holes.”

“I call on the Scottish SNP Government for help, so that hard cash is allocated to help deal with coastal erosion.  And furthermore, the SNP needs to change policy on the way it allocates funding.”

“With more bad weather forecast for the coming weekend, there are obviously concerns about the impact on the course if there is further erosion.” 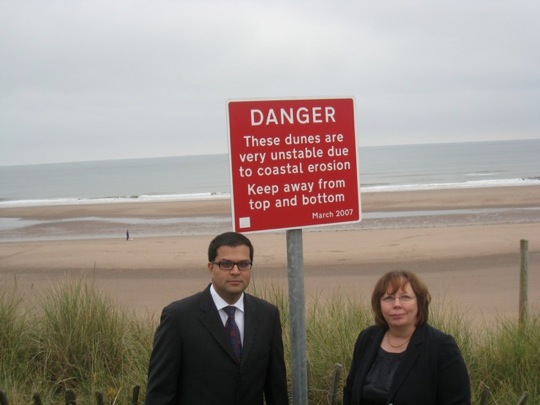