Cllr David May convener of Infrastructure Services and I met in Forfar recently to discuss the impact of the recent prolonged cold snap on roads in Forfar and across Angus. The weather has resulted in a large and unexpected repair bill for Angus Council. Temparature in Angus dipped as low as -13°C, creating significant problems for the Council whilst working hard to keep the roads open and safe.

Whilst the council had to find funds for an extra 13,000 tonnes of salt just to keep the county’s roads open, the sub-zero conditions also caused considerable damage to road surfaces and pavements, which can deteriorate at a rapid rate.

Cllr May said, “There is no doubt that old pot holes are growing and new ones forming on several main and side roads. The damage is caused by water expanding when it freezes, forcing tarmac apart and loosening the surface. Furthermore, recently repaired pot holes have opened up again. The combined effect has had a huge impact on the council’s budget”

I know that the council are already auditing the roads and prioritising the repairs, working through them as quickly as they can. I would call on the Scottish SNP Government to revisit their financial priorities and support rural councils to ensure their roads are safe. In rural areas, such as Angus, the road system is crucial for residents, businesses and farmers.

Cllr May also highlighted that Angus Council is forecasting that an additional £750,000 may be needed by March to meet the cost of winter maintenance and emergency road repairs and he said, “Although Sanjay and I have noted some pot holes and pavements in need of repair and informed the roads officials, we are not aware of all of them and so I encourage people to call ACCESSLine on 08452 777 778 to tell the council about any road and pavement damage. Furthermore, although the roads officials are inspecting the network for damage and taking action as soon as possible, it also also helpful if people in the Forfar area report potholes and broken pavements.” 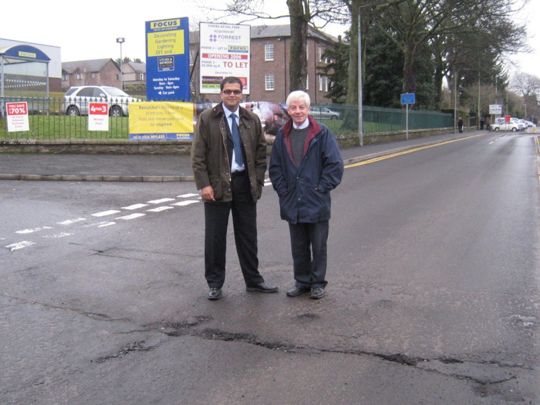