Cllr David May and I visited local farmer, Alex Sanger at his Prettycur Farm, Hillside, near Montrose to discuss issues he is facing.

Montrose Cllr David May and I visited local farmer Alex Sanger, near Montrose, to discuss the issues he is facings, as part of a series of farm visits across the whole of Angus. We heard of issues with drops in cereal prices that meant that it was not worth his while to grow wheat, barley and other cereal crops. Alex also told us of the need for flexibility and common sense from regulatory bodies, such as the Scottish Environmental Protection Agency, SEPA.

As we’re backing the “Buy Local In Angus” campaign, I was delighted to hear from Alex that he supplied local retailers. Having visited both Watt’s Butchers and Nature’s Garden in Montrose, I was very pleased to find out that some of their produce comes from just up the road. For shoppers trying to do their bit for climate change, you cannot get any better than that.

It was very worthwhile, meeting Alex and his colleagues to discuss the issues that they face and a great opportunity for David and I to learn more about the farming industry that is at the heart of Angus’s rural economy. 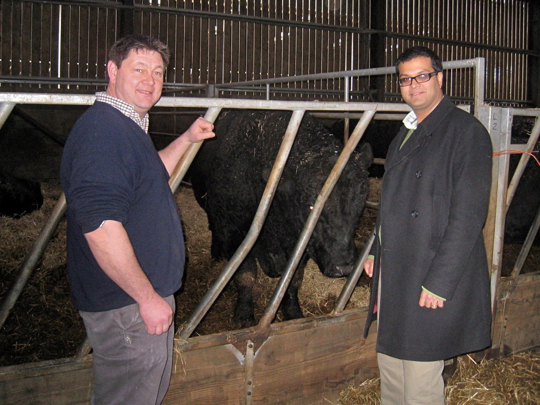